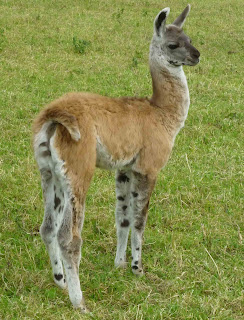 I was going to write this blog on Sunday with news of new cria, Summers new home and breedings but on Saturday Murphy our gorgeous young male llama wasn't feeling his normal self.  At first we thought he had some Colic which normally passes without treatment but he was no better on Sunday.  A visit from the Vet, antibiotics and pain killer administered, fingers crossed he would improve.  His symptoms were similar to our female Alpaca who was so ill last year, nerological twitches, excitable but he also had problems with his sight.  We then suspected he had eaten something poisonous possibly Bracken as the symptoms fitted.  By late Monday he had suffered a fit and it didn't look good, our vet came out and he was given some steriods and some Vit B1 drench, he got really stressed out by this and was very upset we settled him for the night and left him with a companion, he was sitting up and seem alert.
When we arrived at the Barn this morning he had died in the night,  I am absolutely devastated, Murphy has been a dream since the day he was born, he was calm, friendly and so easy to handle, he has been trekking with us since he was weaned, he was starting to carry a pack and a favourite with all our customers and he will be missed very much. 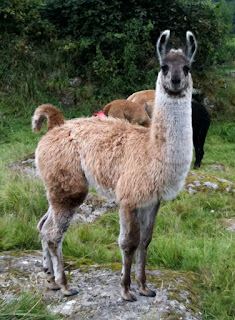 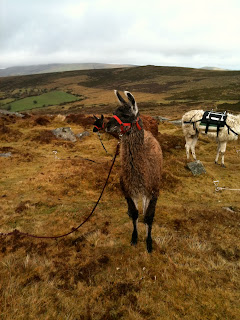 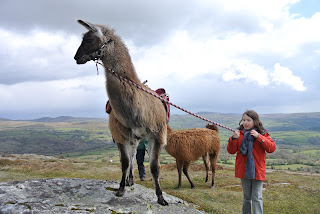 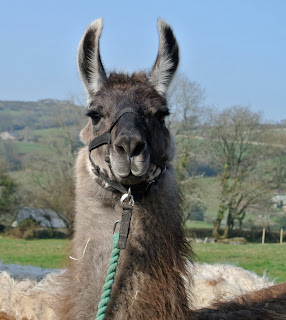 He really was growing into a very handsome boy.
We have had a PM which as usual came back inconclusive but thankfully there was no signs of TB, Liver Fluke or Worm burden which is encouraging for the rest of the team.

Our other news will have to wait for another day.
Posted by Llama Karma at 15:36 8 comments: 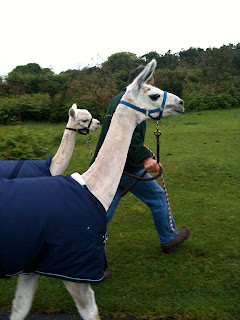 Well as usual after shearing the weather has reverted to something like November, so everything has been in.  The pregnant females/ Mums have been in and out of the Barn several times a day sometimes.  The young Females are tucked p in the Stock trailer when the weather is bad and out in the track when the rain stops for a few minutes.  They are not sensible enough to go in when it saris raining so we have to put them in and let them out when we can otherwise they sit there shivering.  Atlas and Prospect are in the little field shelter and look quite cosy, only going out when it dries up a bit.  We had one of the llamas shorn and Logan who thinks he is a llama but there is no shelter in there field so they have been in the barn for a few days which they were really fed up about.  So as it was drier yesterday we took them back to there mates in the field as you can see they are wearing some very fetching coats which are keeping the worst of the rain off. 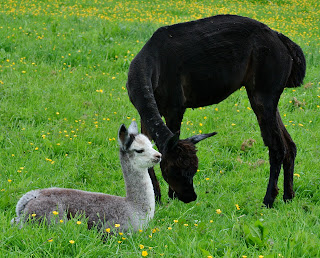 Our little grey female cria is growing well and turning into a little thug, barging into the females trying to get someone to play with her, she desperately needed a play mate!  Mica and Cassini didn't seem in any hurry to provide one with all this bad weather.  Monday promised to be the best day of the week and I had a feeling Mica was going to produce her cria when I looked at her first thing.  Even though it was a bank holiday it was dry and I needed to get some work done so I dashed off to the first job which was about 2 hours work, dashed back to check Mica...... Grazing. Off to second job another hour and a half, back for lunch 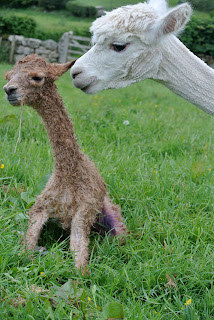 and check Mica...... definitely uncomfortable, I sat in the office to observe, our holiday cottage guests were watching from the balcony, poor Mica, no privacy.  About an hour later she had given birth to a lovely mid fawn boy who was cushed within minutes, inspected by the herd and up on his feet very quickly.  Hummingbird had been waiting nearly two weeks for this, was there in a flash, nudging him and dancing around so excited.  He wasn't interested in finding the milk bar as plying with Hummingbird was far more interesting.  So fearing that he would exhaust himself before feeding I put mum and babe in the pen, that did it, straight to the milk bar, no messing about with sucking front legs, belly, barn walls etc.  Once he had had a good feed and a little rest I let them back out with the herd and Hummingbird.  At three hours old he could give her a run for her money, chasing each other round and round the field.  I think this one ( now named Olympus) is going to be a bit of a character, not surprising really as he has both of our '96' imports in his family both of which are great characters and have a lot of attitude, just hope he has the fineness from Carla's side and the denseness of Demeter, he is a lovely shape and his fleece is very bright and crimpy, but who can tell at this stage. 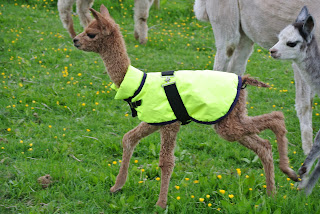 Since Monday it has rained and the two youngsters have been confined to the barn for most of the time but when they have been let into the field for brief periods they have taken advantage and entertained us and our guests with their antics.

Today it has been foul, gale force winds, heavy rain all day, everyone is in and still shivering.  Cassini is looking really uncomfortable so I don't think she will be long now then we have a break until the end of July before the next batch are due.