Well we had about 8 days of dry weather and we made the most of it!
We had 5 llama walks booked in and we managed to do all of them with just one shower of rain on the first one.  We have had a good selection of clients from young children to eighty year olds, locals and from foreign parts, we eaten Lunches, Cream Teas and Strawberries and Cream, drunk numerous cups of tea, coffee, apple juice etc, had a lovely time on all of them and this is what we call 'Work'

In between doing all this walking we have made Hay infact we have made our Hay and Steve's Brothers Hay and for the first time in years we didn't have to rush to get it in.  So we had 520 ish small bales stashed in the Barn, we have now sold 150 and have another 200 to sell. My part in this was to provide gallons of cold drinks and food when needed. (think I got off lightly) it is a very hot and dusty Job I am told.

The holiday Cottages are full we had a couple of weeks with German guests and dispite having terrible weather they all seem to enjoy themselves and were very interested in the Alpacas and Llamas coming out to feed up each morning and then going off to explore the moor etc.  The last week we had British guest, didn't see them all week in fact don't think they got up much before lunch time and it was glorious weather, really can't understand it.

I am now on Cria watch again, we have three females due in August and the first one Olivia is now 320 days, she is huge and sits around a lot although not as big and wide as Marietta who is not due until 24th Aug.  We weighed them all this morning and Marietta has put on 7kg in 3 weeks which seems a lot to me.

Just though I would put a couple of pictures of the girls when they spotted something in their field! 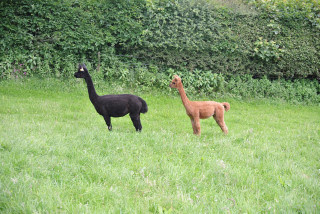 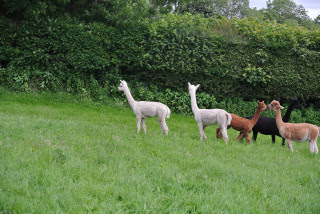 And what was causing all this concern? 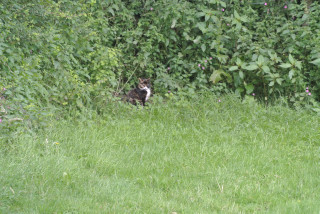 Well it's a stray cat we have seen around the fields for a few days.


Today we had several rain showers and the weather forecast is changeable, so I think we have returned to normal British Summer.
Posted by Llama Karma at 15:18 1 comment:

I have been having problems sitting down to write anything on the Blog since my last entry mainly because I found it very hard dealing with losing Murphy,  Some animals just have a bigger impact on your life than others.  For several days I didn't want to even go to the llama field, even contemplated giving up the llama walks all together.  Steve as always was more philosophical about these matters said that it wasn't the time to make that sort of decision and as we have lots of booking we really would just have to carry on.  It is getting better every day but I still think about our gorgeous young llama.

So whats been happening here?, well  it has rained a lot!, we have got very wet a lot!, we haven't done much work, we have canceled several llama walks but we are surviving.

We have had some good times, the last of our first batch of cria arrive two weeks ago, another girl from Cassini, she is either dark fawn or light brown, sired by Inca Picasso.  She weighed in at 9kgs and just like Picassos cria from last year, full of beans with huge legs very big boned but like Cassini's cria last year Choc Ice she isn't growing very fast, it is a worry as she won't take a bottle, just like Choc Ice, she is active but not as much as the other two, feeds from Mum a lot and is already picking at grass she has been named Tiffany.  Choc Ice has caught up with the rest of last years crias now, but we probably won't breed Cassini again as there is no point if she isn't going to produce good strong babies and she could pass on her problems.

We decided to have a couple of days away, go and see my sister in Emsworth and pop up to Hampton Court Show as it was forecast to be raining any way.  So looking at the forecast, Thursday seemed to be the obvious day to go, there was a amber weather warning for heavy rain!  We both had full days work booked in but if it was wet that would be called off and we could leave after we had feed all the animals.  Thursday dawned and there was a strange light in the sky, there was blue bits and a certain glow (think thats called sunshine)  so off to work we went and it stayed dry all day, we finally left about 6pm.
Very easy drive, hardly any traffic and we arrived in Emsworth about 3.5 hours later after stopping for something to eat.  Friday we went to Hampton Court, it rained but it was very good and we had a lovely day although some of the show gardens looked like they needed a good go with the Strimmer, I think they call them Natural gardens, I call it long grass & weeds!
We went out for a lovely meal in the evening with my sister and brother in law, had a lovely time catching up with family news etc.  After a big breakfast we set off for home about 10am we arrived back at 6.15 pm after spending most of the day trying to get through Dorset, we tried Bridport, then Yeovil and then Crewkerne, sat in lots traffic queues which weren't going anywhere,  Finally managed to take some small roads across country to Beaminster going through some floods which I am sure we probably shouldn't have and finally getting back on to the A35 and home.  Just in time to get changed and go out for Dinner with friends, exhausted.
Last Sunday we took three Alpacas, Choc Ice, Tigerlily and Lalique to our annual Animal Service on the village green, very Vicar of Dibley.  Our guests in the holiday cottages came along with their children, they are from Berlin and had a lovely time, afterwards they said to me they thought it was very English.  I don't think the Alpacas were as impressed they wanted to get back in the trailer as soon as they could I had to stand on the ramp for a while to keep them in the pen, as soon as the service was over they shot back in. while we had a cream tea and a chat to everyone else who had brought various animals along.

We have had one of the cottages empty this week which is un usual at this time of the year but it has been so wet, nobody is booking last minute with the forecasts we have been having. I feel so sorry for our German family, they have driven all the from Berlin and all it has done since they arrived is rain.  The first thing they asked was where can we buy waterproofs! poor things.  The children have been coming out to help feed up in the mornings, which they love and their English is so good, they are 7 & 5 which really puts us to shame.
Posted by Llama Karma at 15:18 2 comments: