It has started,  Show time and I have really missed going to the Futurity, it sounds like it was a great show and everyone enjoyed themselves and some people had some impressive results.  We had planned to go up and watch the proceedings and catch up with the Alpaca gossip. didn't miss the politics though.

Anyway all the talk of shows has spurred me into getting some show entries sorted, I printed the forms and even got onto the BAS site, then I couldn't decide who was going to make it into the small but perfectly formed Show Team.  The discussion has taken place and we have decided to have another look at fleeces before we actually do the entries.  not sure why as they will look completely different before the shows anyway.

Then there is the question of Trade stands at local shows, after last years disastrous show season we are all hoping the weather plays ball this year, we have a very busy July and August planned.

I have been busy making Bridesmaids dresses for my eldest daughters wedding in July, it is a while since the old sewing machine has been in action but I am quite enjoying myself, I think I could get back into it if I didn't have so much to do with our knitting yarns, there is just not enough hours in the day.

With the wedding coming up my youngest daughter wanted to go shopping for a hat, didn't know what she was going to wear but was going to buy a hat!  so Sunday youngest, eldest and myself went to Exeter for the day Shopping!  we had Coffee, we had Lunch, we looked at lots of hats and had a laugh but we didn't buy anything, never mind we will just have to go again!

Well we will need to buy something to wear!

Right I am now going to try to update Alpaca seller!
Posted by Llama Karma at 13:34 No comments: 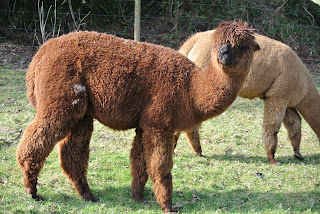 Lalique, another one bred to Jack of Spades, now it is either her or Iona but not both! 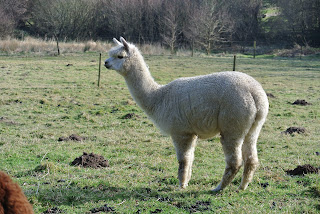 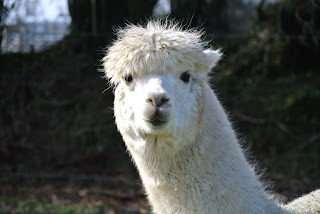 Tigerlily, she is such a sweetie, probably could be persuaded to put her on the list 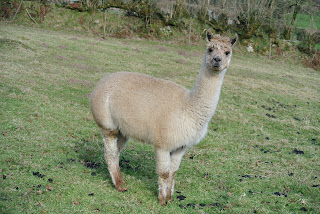 Cassini, pregnant to Golden Prospect, could be exciting, mum to Choc Ice and last years cria was female as well, Tiffany, she was on the list, possibly, maybe! 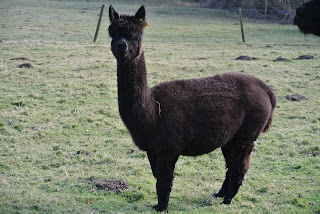 I still have a few to photograph and then theres the cria but my Sales list doesn't look very big yet!
Posted by Llama Karma at 14:55 No comments:

The Sun is out, the Sky is Blue

And about time too, I have spent the last few days listening to the weather forecaster telling me that is is glorious in Devon, when we have been living with cold, grey cloud with a bitter cold wind thrown in for good measure.  Today started of much the same but about mid morning a strange bright glow appeared and the sky became a strange blue colour, I think I remember it happening before but it was such a long time ago!  anyway it was a welcome change and did a lot to improve my mood after yesterday.

We have made a decision which I am sure will divide opinion but here goes.  Hummingbird was such a lovely girl and her fleece was such an amazing silver grey, not great quality, somewhat lacking in all those traits we hear the judges waffling on about and there was a lot of it.  As we have a Sheepskin processing plant locally to us we have decided to have her skin as a rug.

I did the feeding up this morning on my own as Steve was on a job (playing on his mini digger) it was a bit strange only the five cria but they all seem happy and thankfully healthy.  I even managed to take the camera and get some shots of the females, unfortunately the batteries in the camera ran out before I got back up to the cria so hopefully it will be dry tomorrow and I will get some shots of them.

The problem with taking pictures is that Caramel seems to think she has to be in all the pictures.  So it took some time to get shots of everyone who Steve says has to be put on Alpaca seller.

Then some of the others whilst Caramel was otherwise engaged 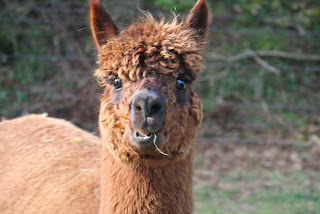 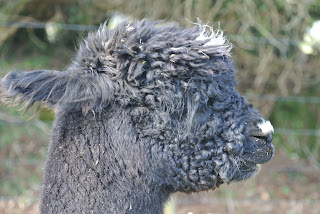 Hebe, Jack of Spades Daughter bred to Wessex Mambo, really looking forward to seeing her cria so not on list until after she has produced (maybe) 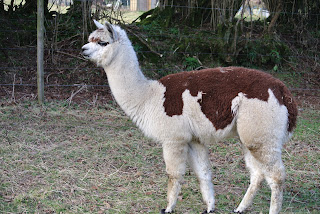 Choc Ice maiden female not bred yet, even though she is cute she is probably on the list 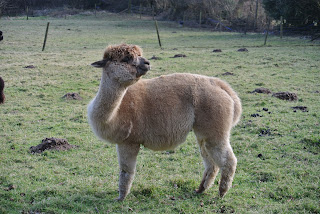 Marietta (my favourite Alpaca) bred to Langaton Caliban, every cria she has produced has own a Rossette - definitely not on the list.

More photos tomorrow and I will have to start adding some to Alpaca Seller!

Just a very short blog tonight as I don't really know what to say. We had to put Hummingbird to sleep this afternoon as she had got worst overnight and the Vet was called again, he diagnosed Meningitis, which he said was very rare.  That doesn't help much but at least we tried to do as much as we could.
Posted by Llama Karma at 11:01 10 comments: 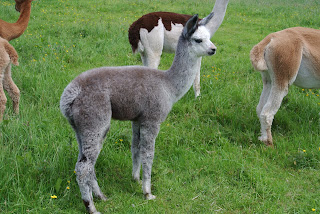 To say I am a little worried is an understatement really, I am very worried about Hummingbird our grey cria who is about 9 months old.  She was weaned three months ago and had been reintroduced to the herd with no problems until two weeks ago we weaned the rest of last years cria and decided to put Hummingbird with the rest of her piers, this would make halter training easier as all the weanlings would be in one place.
A few days ago we noticed Hummingbird was looking a bit lethargic and wasn't eating, every time we went to their paddock she was sitting down, not interested in anything.
Ok what could it be the rest of the group were all as bright as buttons, Worms?  gave here a dose of Zolvic, she picked at her food the next day but really wasn't any better, she had a dose of Vecoxen and we gave her a mineral drench.  still no improvement but no worst either. I was afraid she was becoming dehydrated so gave her a syringe of water a couple of times a day.  By now I was becoming a bit desperate so we thought we would try some Cows Colostrum just in case it would help.  After a couple of days and no improvement I wasn't sure what else to do next.  Last resort I tried some honey rubbed inside her mouth, well don't know if it was a coincidence but she was up and went straight to the hay bag, started nibbling.  There hasn't been much improvement since but I am going to continue with the Colostrum for a couple more days and she had another dose of honey today, she seems to be a bit brighter but who knows! 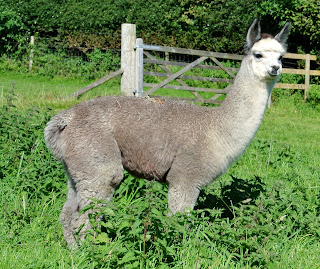 Why do we put our selves through all this?
Posted by Llama Karma at 13:26 1 comment: